This review is part of the 5th Annual Favorite TV Show Episode Blogathon.

‘Nightmare at Northoak’ was the first episode of The Fugitive I ever watched (or at least the first one I remember watching).  I do take issue with the title because, as you’ll see, the nightmare doesn’t really happen at Northoak – it’s in Kimble’s mind.  Northoak is one of the nicest places Kimble ends up, IMO. 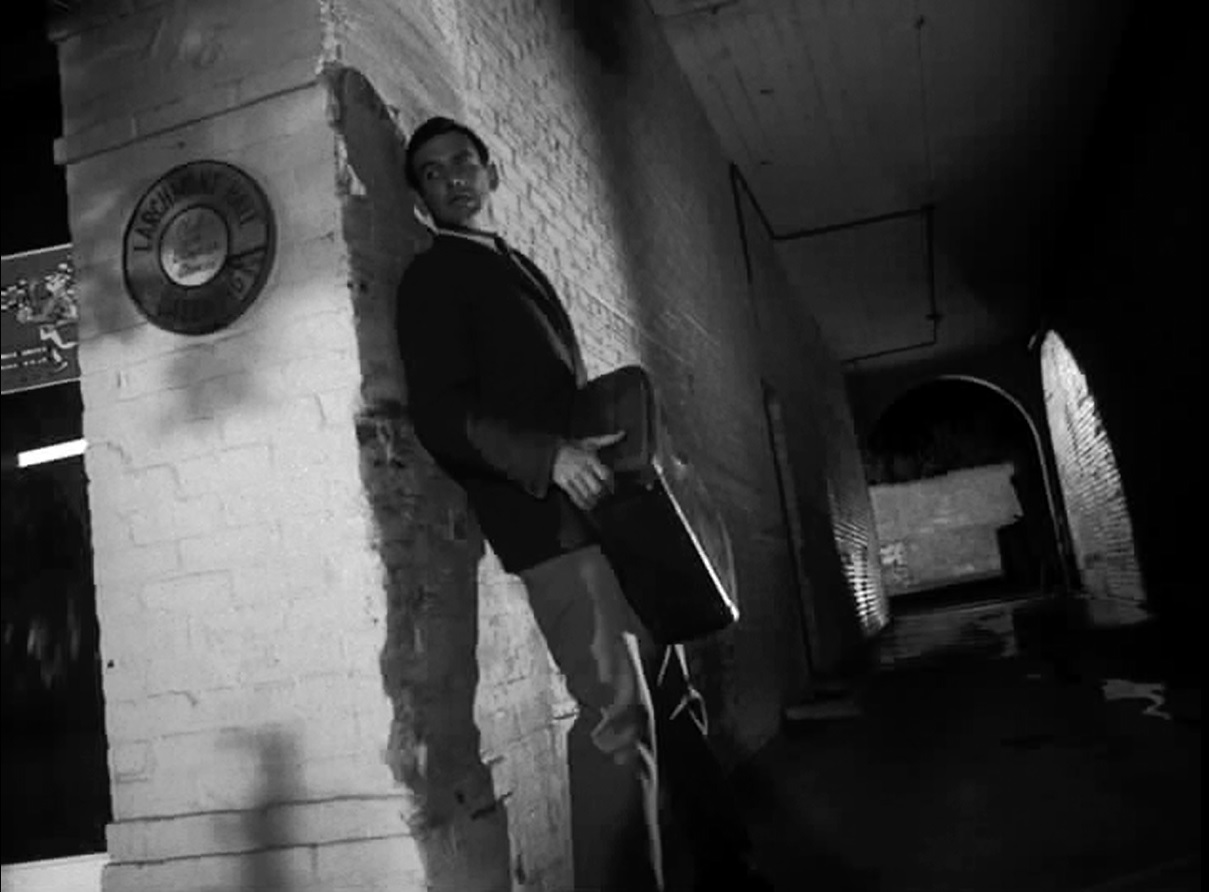 The episode opens with a creepy scene where Gerrard tracks Kimble through deserted streets until Kimble is finally cornered.  Gerrard pulls out a gun and…Kimble wakes up.  It was all a nightmare.  Gerrard hasn’t caught up with him – yet.  But just as the nightmare fades away, Kimble hears screams and the sounds of a vehicle careening out of control.

He scrambles out of the forest where he was sleeping.  A school bus has crashed and now flames shoot from the wreckage.  The driver is unconscious and the bus is full of panicked children.  Kimble directs them out the back of the school bus, drags the driver and a sleeping kid out, and then goes back in to make sure no one else is left inside.  Predictably, the bus explodes and Kimble is thrown from the wreckage – knocked cold, but alive.

The children from the bus drag him away from the burning bus (and presumably one of them runs for help). 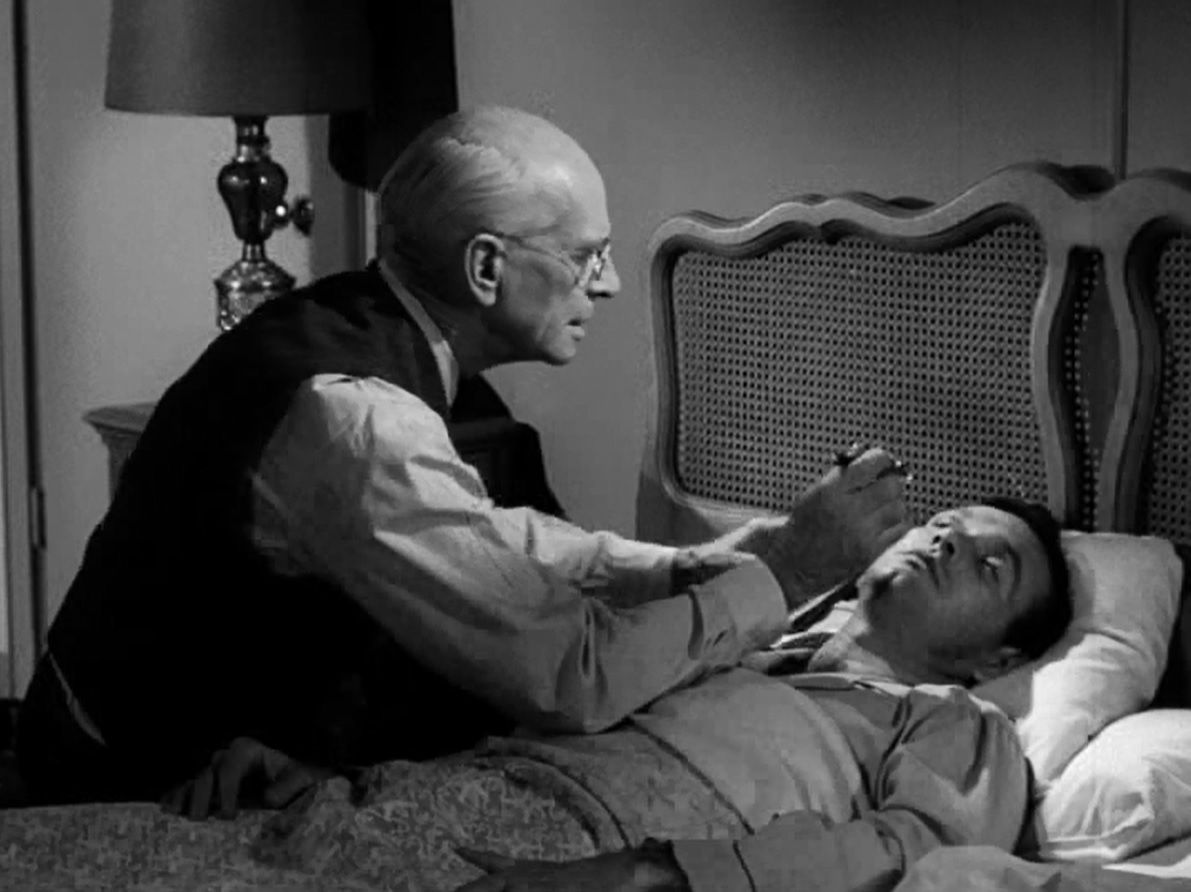 When Kimble wakes up, he’s lying in a strange bed in a strange house.  Concerned citizens wait outside his bedroom to see how he’s doing and to repay their debt of gratitude by covering the doctor’s fees (something the doctor insists on doing himself – “Those kids he saved…I brought every one of them into this world”) and bringing ham, pudding, and calves’ foot jelly for the invalid.

The family that Kimble is staying with, the Springers, sends everyone home but not before Mrs. Springer – Wilma – declares that whoever is responsible for the accident should be brought to justice.  It seems that even though her husband is sheriff of Northoak (something Kimble discovers very quickly – and to his great trepidation), Wilma is the moral center of the town. (Though Al, her husband, is a really great, upright sheriff.  He’s played by Frank Overton and I love it.)

A nosy reporter drops by the Springer home, asking if he can take a photo of Kimble (who’s calling himself George Porter in this episode).  Wilma says ‘no’, but the reporter gets Larry, the Springers’ son, to sneak into the sick room and take a photo.  Luckily, there’s a cold compress over Kimble’s eyes, but it’s still a risk for him… 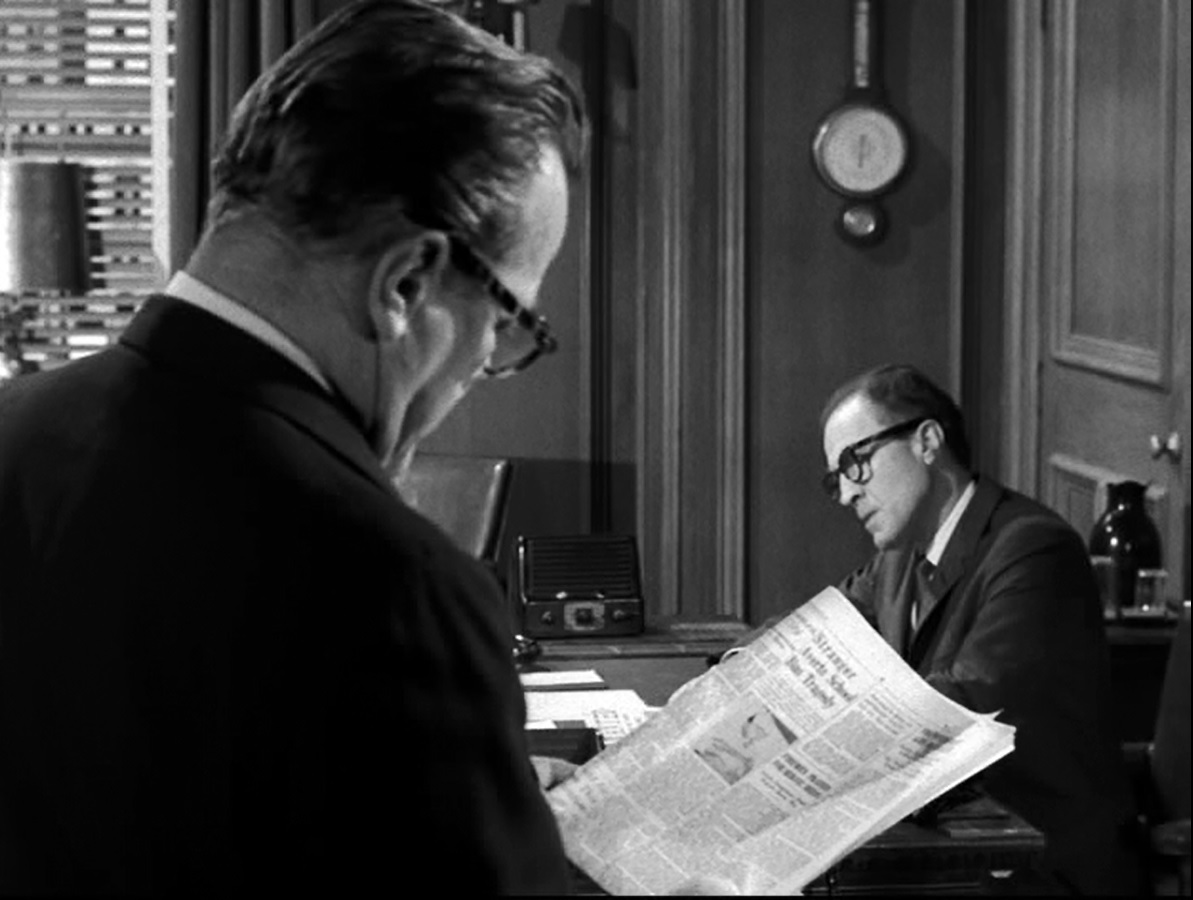 …because Gerrard sees the article and the photo and instantly becomes suspicious.  Gerrard is actually in very few episodes of the show, but he’s truly menacing in this one.  A soulless, heartless tool of the law.  The mystery savior in the news article has no ID (“could’ve lost it in the accident”) and the lower half of his face bears a striking resemblance to the lower half of Richard Kimble’s face.  It’s enough for Gerrard and he sends a telegram (or a phone call – I forget) to Al, asking him to fingerprint George Porter.

Al is really embarrassed about this.  He can’t see how this gentle, quiet man who rescued the children of Northoak could be a convicted murderer.  But he has to do his duty, so he takes Kimble’s fingerprints. (Oh, and somewhere between the taking of the photo and Gerrard seeing it, Kimble also saw it and tried to escape.  But he collapsed and they brought him back.  Nobody’s suspicious of that though, at least not right away.) 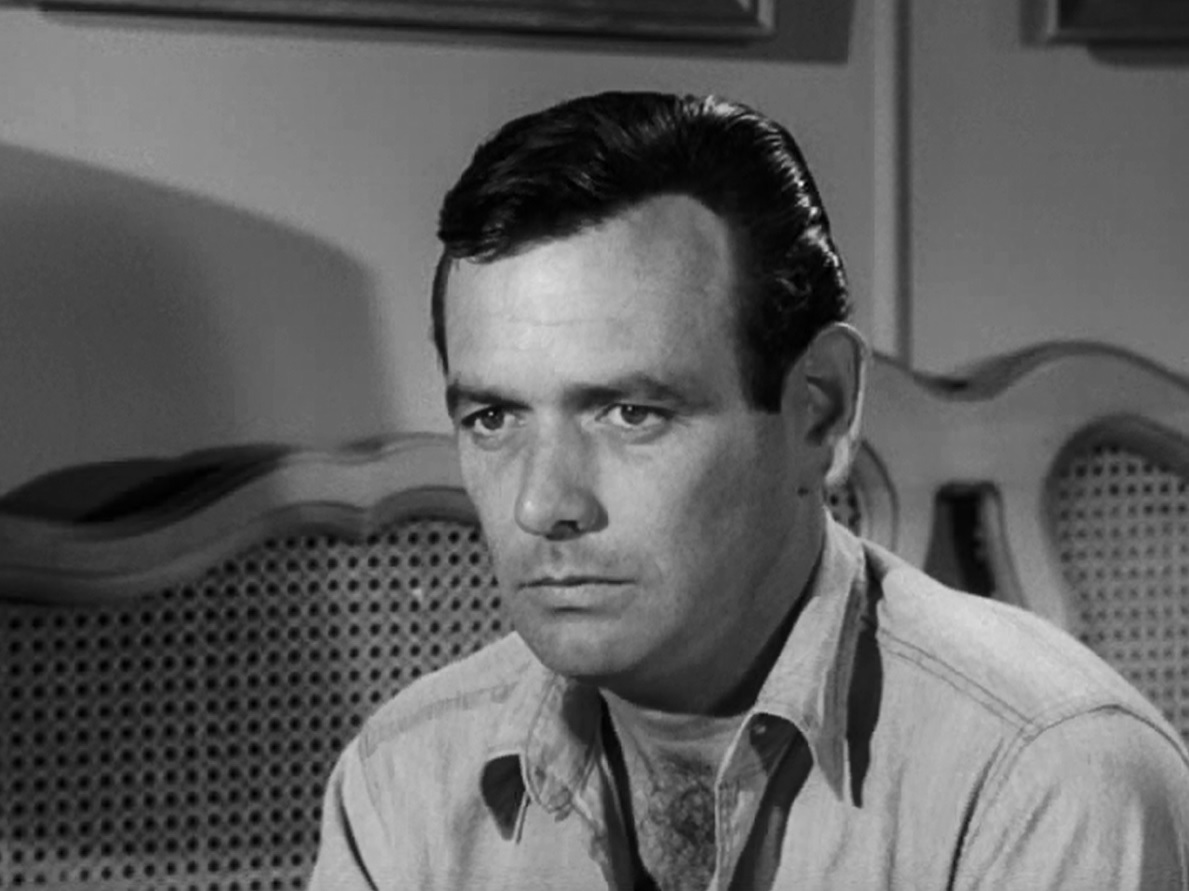 Kimble is desperate to escape once his fingerprints are taken.  As soon as Gerrard gets them, he’ll be in Northoak.  Al leaves the sick room to make a call, leaving Wilma behind, and she finally puts two and two together.  Kimble’s nervousness, the photo in the newspaper…it all adds up to mean one thing: George Porter is a wanted man.  But before she can call her husband, Kimble closes the door.

Wilma is doubly shocked and horrified to hear that he’s been convicted of killing a woman – and his own wife, no less.  Kimble pleads with her to let him go, to walk out the door, close it, and not tell her husband.  “Isn’t that a fair trade?” he says desperately just before she leaves.  “A life for a life?” (Because he saved Larry’s life, you know.)

Wilma battles within herself.  Should she uphold the law and do what’s right as she’s always done?  Or should she believe this strange man and let him go for the sake of her son?  For a moment, she almost does it.  She almost lets Kimble go.  But then she turns to her husband and tells him everything. 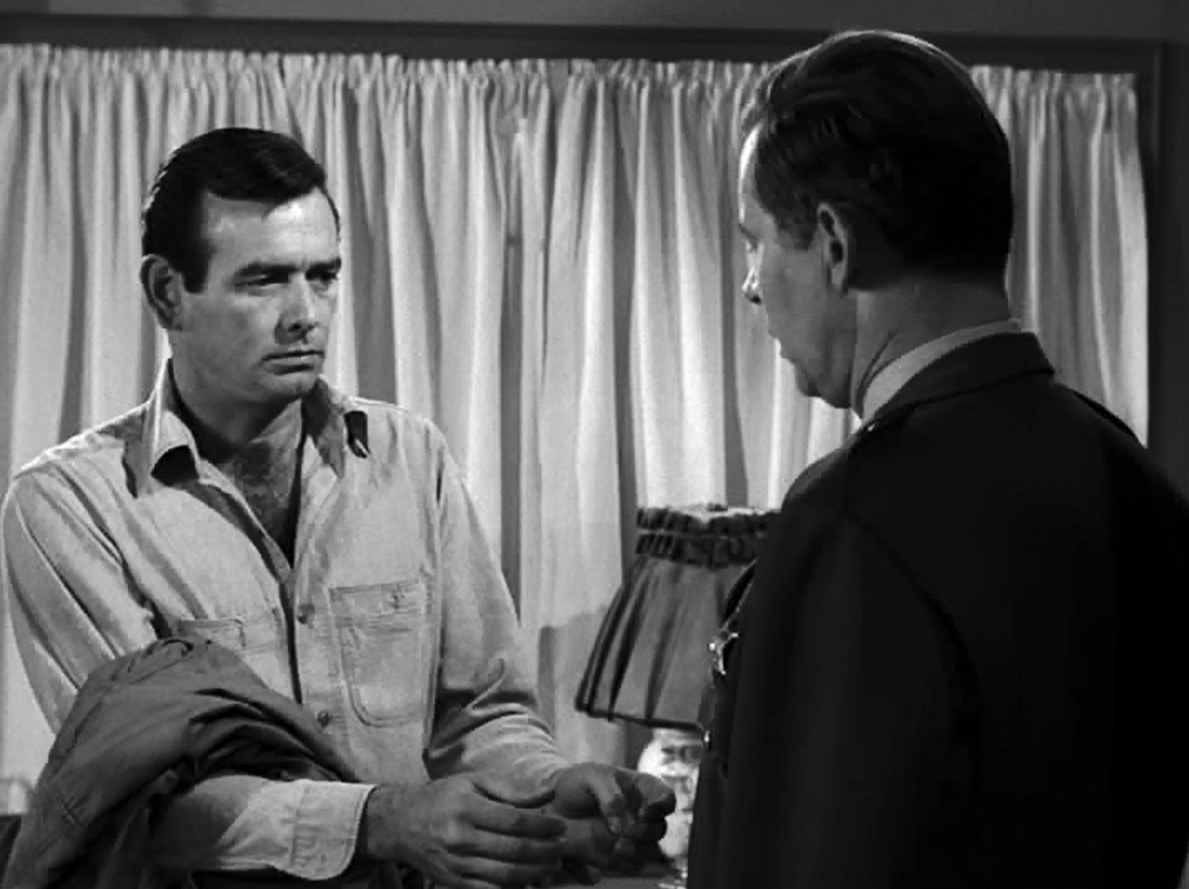 It’s a bleak moment – for everyone.  Al takes Kimble down to the jailhouse.  Deputy Ernie (played by Paul Carr – so nice to see another familiar face) helps him keep an eye on Kimble until Gerrard arrives.  Gerrard instantly puts everyone on edge – they don’t want to turn Kimble over to this strict, robot-like man.  Al resents Gerrard’s hints that Kimble will somehow escape if he (Gerrard) joins Al for dinner.  But he finally relents and goes to the Springers’ home to enjoy a hearty, home-cooked meal.

During dinner, Gerrard is the only one that’s really eating.  Larry suddenly starts crying, saying that it’s his fault Kimble is back in jail because he took the photo.  Gerrard tries to explain that it was a good thing he did, but Larry leaves the table.  He doesn’t want to hear Gerrard’s harsh rhetoric – and neither do I.  Al goes back to the jailhouse, leaving Wilma alone with Gerrard.

“Couldn’t what he did for our children lighten his sentence?” she asks.  Gerrard says ‘no’.  The law is the law.  The law is inexorable.  And, when Wilma tries a different tack and asks if Gerrard really believes Kimble is guilty, he simply says, “The law says he is.”  And that, apparently, is that.

Back at the jail, Gerrard checks on Kimble and they have a conversation which starts out polite but quickly goes downhill. “When they feed me my last meal and strap me into the chair, I’ll still say the same thing,” Kimble says. “I didn’t kill my wife.”

According to Gerrard, it’s true – at least for Kimble. So many hours of sleepless night, so much running, so much time to think…of course Kimble now believes he didn’t kill his wife. He’s made the fantasy of his innocence true in his own mind.

This, of course, isn’t actually true. Kimble is innocent. But it’s a frightening glimpse into the workings of Gerrard’s mind. Could we flip his words to mean that he will never believe Kimble is innocent? That even if he’d started out with a flicker of doubt as to whether or not there was a one-armed man, he’s now convinced himself that Kimble cannot – can never – be found innocent? 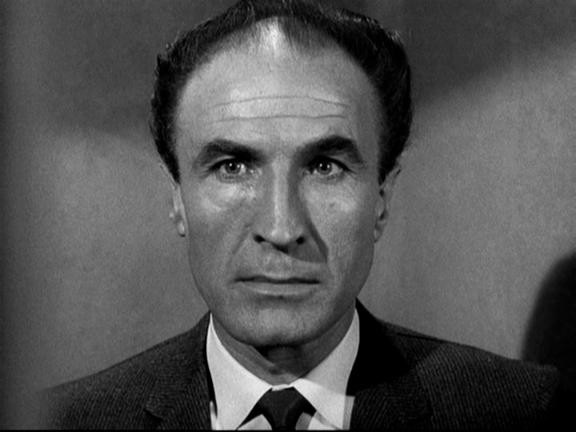 Maybe Kimble is thinking something like this when he says, “I believe you have nightmares too, Gerrard. I believe your nightmare is that, after I’m dead, you’ll find who really did it.”

The blow strikes home. Gerrard retreats, bringing his cigarette to his lips with shaking fingers.

When he comes out of the cell block, Al has gathered quite a crowd of people. They want to say goodbye to Kimble, to thank him for their children’s lives. It’s a touching moment (one that Gerrard sneers at) as each person files past Kimble and shakes his hand. The last one to do so is Wilma. Regret, sadness, and a little desperation cross her face as she walks away from Kimble’s cell.

And that’s when he opens his hand to reveal the key. Someone slipped it to him.

And so, Kimble escapes again. (I’m not going to go into the details of his escape because it would make this blog post too long. But it’s a good trick played on Gerrard. A really good trick.)

But the episode isn’t over! In the ‘epilog’, Al assembles everyone who said goodbye to Kimble the night before. One of them, he tells Gerrard, passed Kimble the key. But Gerrard has other ideas. “It was you,” he tells Al. “You let Kimble out.”

Al takes exception to this – and rightfully so. Surely he had ideas of letting Kimble go free. After all, Kimble saved his son’s life. But the sheriff side of him won out – and now it seems like that was for nothing, since Gerrard accuses him anyway. But at the last moment Wilma steps forward.

Gerrard eyes her. “You know what this means, Mrs. Springer.”

Until a wonderful thing happens.

“I’ve been in this office often enough,” the doctor cries. “I gave him the key!”

“He saved my life,” the driver of the school bus says. “I was repaying him. I gave him the key.”

And suddenly everyone stands up, everyone admits to giving Kimble the key that gave him his freedom. In a way, it’s true…although Wilma was the one who actually did it, they all would have. It’s a triumphant, singularly happy ending to an episode of The Fugitive.

(Well, not quite. Because after that scene, things go back to Kimble’s point of view as he wanders the streets of another town. He sees a ‘Help Wanted’ sign. “Help wanted,” the narrator intones. “But there is no help. The only consolation Richard Kimble has is that in some town – perhaps this one – there is a one-armed man who has nightmares…of him!”)

But still. ‘Nightmare at Northoak’ is a lot happier than a lot of Fugitive episodes.  And that’s why it’s my favorite episode in the show.

9 thoughts on “the fugitive episode review: ‘nightmare at northoak’”